Talk to the team today

And we'll get back to you

ADU Software Technologies UK & Have I Seen It

ADU Software Technologies UK & Have I Seen It have joined forces to bring you a new unique application giving you Airport Arrivals which gives you notification of if you need the aircraft as a frame, registration or if you have seen the aircraft and also an Aircraft Radar plotting the aircraft within the location you select again detailing if the aircraft is required or not required.

Whilst we appreciate there are several flight radar applications available, none of them are able to incorporate your own personal seen details advising you when an aircraft has been seen or if it is required.

An internet connection is required for all this operation.

If you start typing an airport name or 3 or 4 letter code, you will be presented with a list from over 7000 airports in the system. 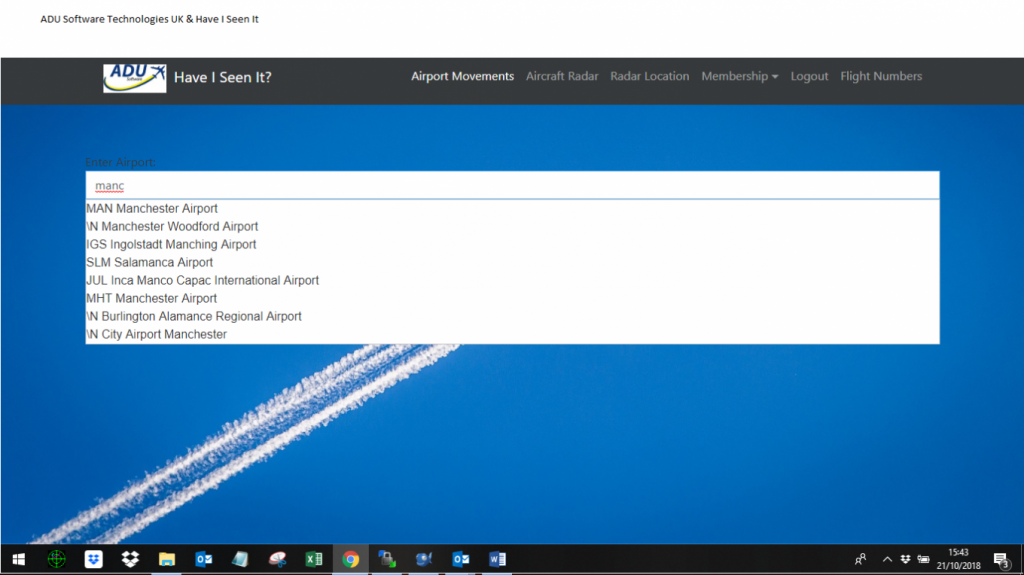 Watch ADU Have I Seen it live

Join us by clicking https://adu-haveiseenit.com/join-us/ 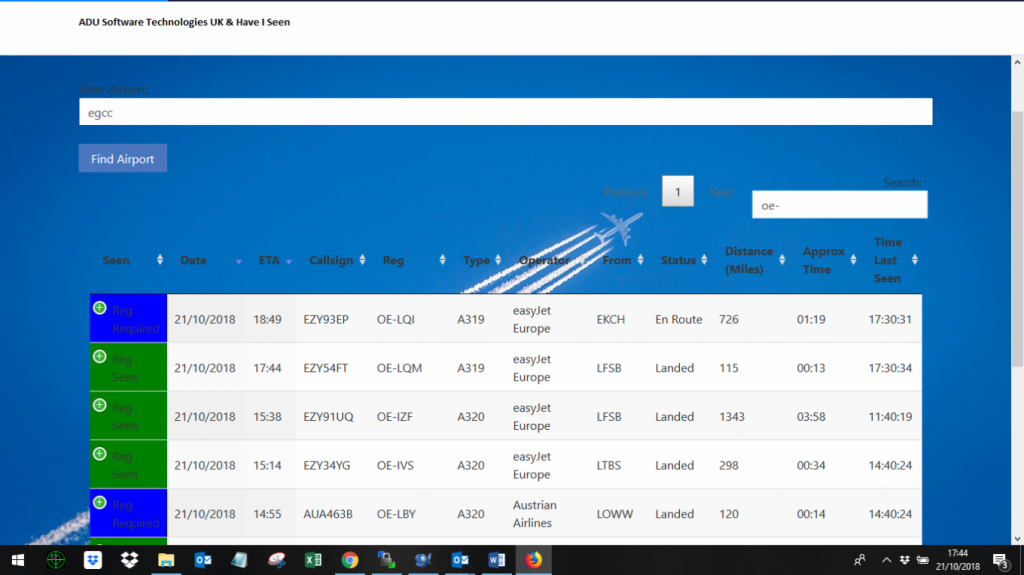 The green plus in the seen column expands the last 3 hidden columns of altitude, speed and vsi.

You can order by any of the columns in this example the rows are ordered by time last seen. 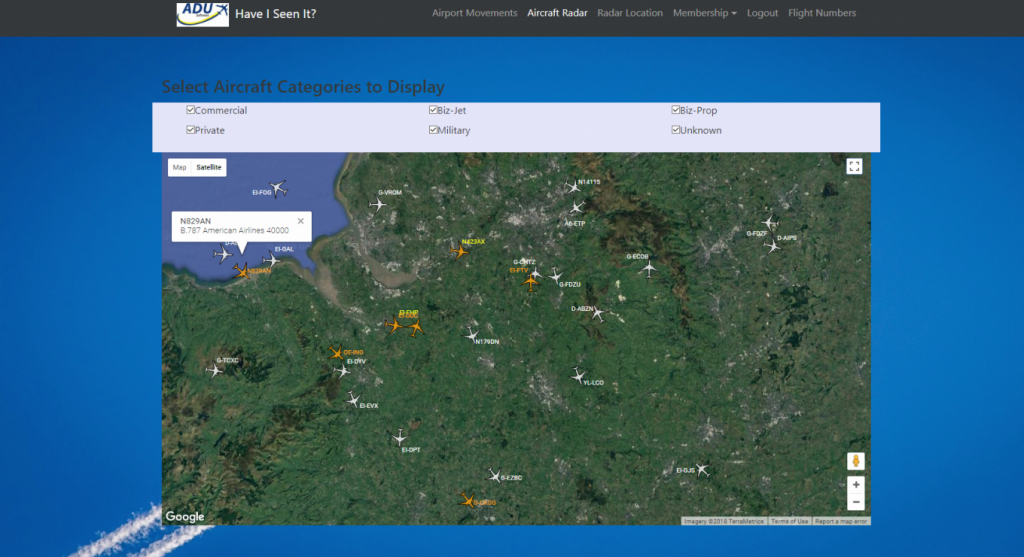 You can also filter out your frames or registrations required, Aircraft Radar

Aircraft radar displays any aircraft being tracked based on the location you have selected from the radar location menu item. Aircraft are displayed within a 100 mile radius of the location selected. The radar allows you to filter by aircraft grouping (commercial, biz-jet, biz-prop, private, military) by clicking the relevant checkbox. Aircraft grouping is based on the aircraft’s 4 letter ICAO designation e.g. B744 for Boeing 747-400. For any new designations they default to unknown until they are grouped. 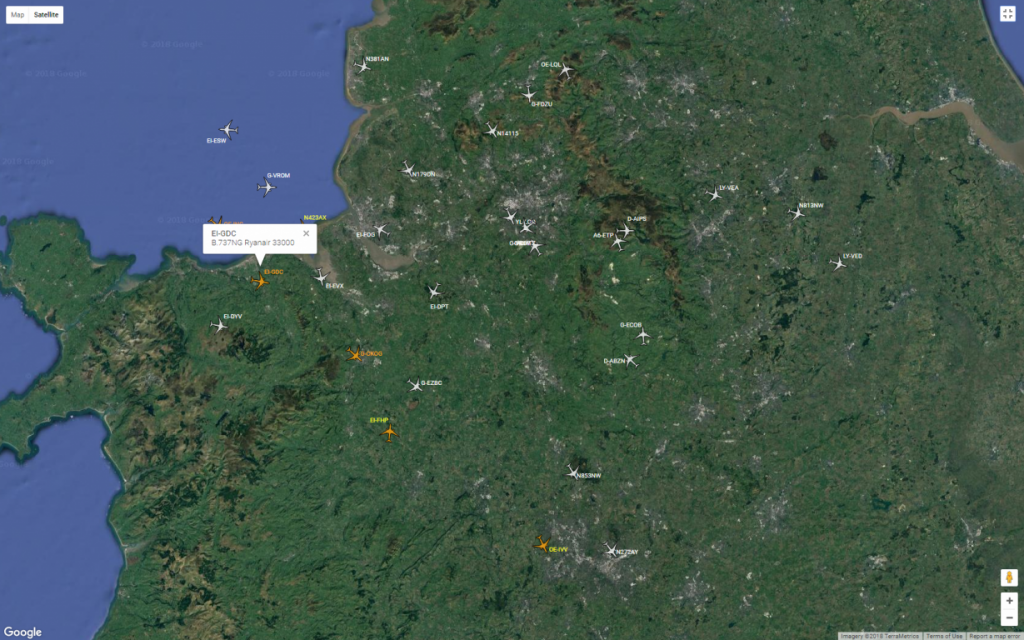 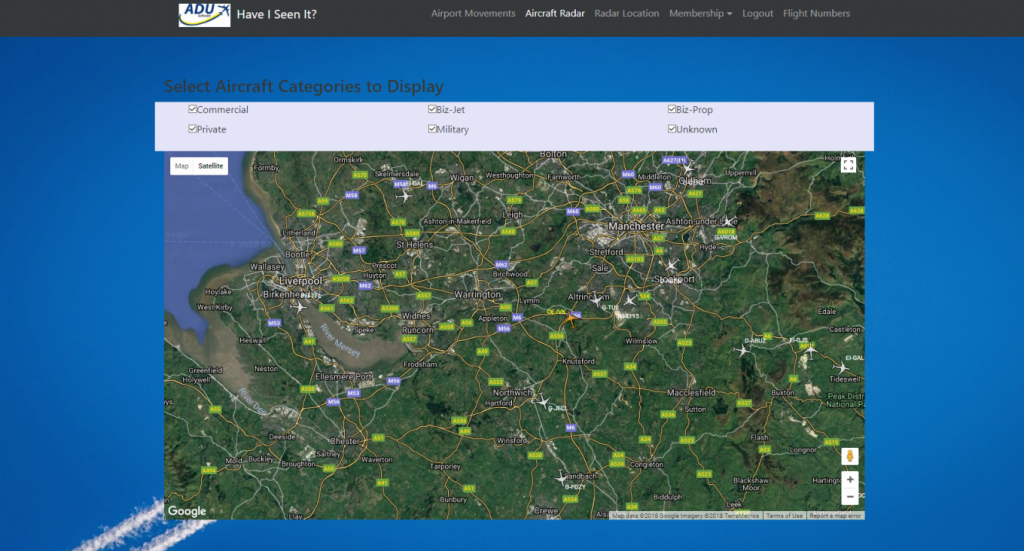 Each icon has an info Window which contains registration, type, operator, callsign and altitude.

The screen is refreshed every 5 seconds.

You can change the aircraft radar’s centre point by using the radar location menu item.

Allows you to change where the Aircraft Radar is centred based on an airport’s latitude and longitude. Start typing the airport’s name or 3 or 4 letter code and you are presented with list.

In this example Manchester airport is selected.

Click the Update Radar Location button and OK on the prompt saying location changed and you are taken to the new location on the Aircraft Radar. 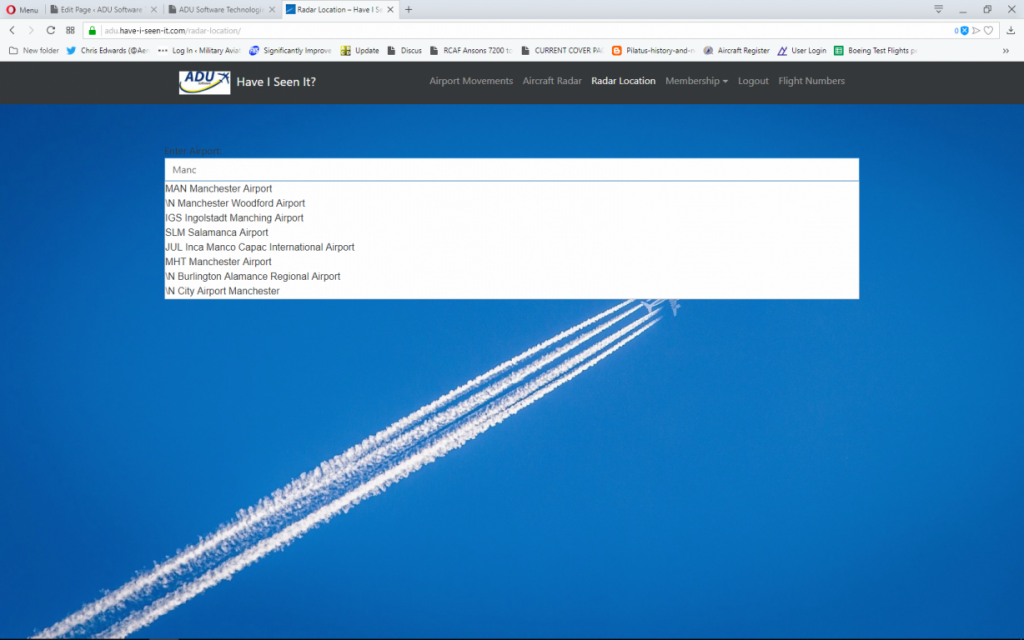 Aircraft spotting is certainly no new past time. However in the early years the only means of doing the hobby was to record your sightings of aircraft seen in a pad or note book, this would be your ‘log book’. In addition photographs of aircraft seen would be taken and included in aircraft enthusiast’s photo albums.

Aircraft registrations can be found in books, with online resources, or in monthly magazines from enthusiast groups. Most aviation enthusiasts maintained books of different aircraft fleets and would underline or check each aircraft seen. Each year, a revised version of the books would be published and the aircraft spotter would need to re-underline every aircraft seen. With so many aircraft moving from Airline to Airline, these books were out of date before they had even left the printers!

With the development of commercial aircraft databases aviation enthusiasts were finally able to record their sightings in an electronic database on their pc, laptop or netbook and produce reports that emulated the underlined books as well as linking their photographs electronically to a particular sighting. ADU Software is one of those databases which has a team of editors who are aircraft enthusiasts themselves who update the aircraft movements in the database so this can be passed on to ADU Software customers in the form of web or CD data updates. This enables aircraft spotters to have updated information as and when they need it without the need to wait until next year’s publication of a book is released.

With advancements in technology, aircraft spotting today has come into its own and it is now easier than ever to track aircraft movements and even log your sightings whilst out and about.

Aviation Enthusiasts are now able to use equipment such as ADS decoders to track the movements of aircraft. The two most famous devices used are the AiNav Systems Radarbox and Kinetic Avionics SBS series. Both of them read and process the radar data and show the movements on a computer screen. ADU Software has also written an integration program for both these decoders in the form of an ADU Software SBS utility which shows the aircraft registration on the screen and also links in with ADU Software customers seen details on their pc to notify the user if the aircraft is required or has been seen before. All without the need of an internet connection!

For use with Iphone, Ipad & Android mobile devices. This totally changes how aviation enthusiasts do their aircraft spotting and eliminates the need for aviation enthusiasts to carry laptops when travelling around the world aircraft spotting. With the ADU Software Mobile app, it is like having a log book in your back pocket. Users can search for aircraft whilst out and about to reveal the details and to find out if they need an aircraft or whether they have seen an aircraft before.

Aircraft can be logged on the mobile whilst at an airport in the same way as being logged in a logbook. The online search facility can be used as a reference tool to find out information on an aircraft and whether an aircraft has been seen before and where and when.

All the aircraft logged on the mobile device can then be synchronised straight back into the main ADU database that is on a laptop or pc at home. The ADU Mobile App does not need to be connected to any data wireless connection when compiling a log. Online search facilities must have wireless or data roaming. Synchronisation between your mobile application and your ADU Software database must have wireless or data connection. Once synchronised and the log is contained within your ADU Software database then the log will be automatically removed from the mobile device.

ADU Have I Seen IT

More recent ground-breaking developments at ADU Software include the ADU Have I Seen It Application.

ADU Software Technologies UK & Have I Seen It have joined forces to bring you a new unique application giving you Airport Arrivals which gives you notification of if you need the aircraft as a frame, registration or if you have

Whilst we appreciate there are several flight radar applications available, none of them are able to incorporate your own personal seen details advising you when an aircraft has been seen or if it is required.

An internet connection is required for all this operation. Visit the ADU Have I Seen It Tabkey on our website for more information.

Social networking platforms, such as Twitter,and Facebook, as well as many Yahoo Groups allow avid enthusiats to record their activities, connect with other spotters and discuss their hobby advising of the best plane spotting hotels and locations and sharing information on when particular aircraft may be visiting a certain airport.